A. Overview – Our show is broadcast on WVOX at 1460 AM Radio live on the second Tuesday of each month from 7pm to 8pm EST. And worldwide on http://www.wvox.com. The WVOX studio is located at Whitney Media (for WVOX AM and WVIP FM – 93.5) at 411 Fifth Avenue, New Rochelle, NY 10801 (near Potter Ave.)  The call-in number is 914.636.0110.
Each month, co-hosts Frank Sisco, Tom Sullivan, and Kelly Sisco (and periodically Ken Kline)  moderate lively discussions among guests in the New Rochelle, NY studio and call-in guests on a wide variety of topics related to the crisis and stress people are experiencing in their lives, in areas that include financial problems brought on by loss of job or business, relationship problems include divorce and separation, health problems including death, disability, sickness, aging, disease, etc,. physical such as fire, floor, accidents, injuries, acts of God, etc.

Live video also can be seen on wvox.com. Prior shows are (1) a few are shown at the below links (2) on youtube (by searching on Crisis Help Radio Show and Fran Sisco and Tom Sullivan),  and (3) on Facebook under Francis Sisco.  The show was begun in 2008 during the nation’s financial crisis. The show focuses on themes and helpful strategies that are discussed on the show include staying positive, getting the help of others, seeing the silver lining even as you face adversity, teamwork, spirituality, appreciating that the flip side of crisis is opportunity, expressing your authentic self, using creativity and creative endeavors (e.g. music, writing, poetry, performance, acting, painting, sculpture, teaching, etc.) to develop new solutions and giving fully of yourself to others. Our shows often include specific suggestions provided by our in-studio guests and phone guests who are experts or have particular experience and points of views in the areas being discussed.  If you would like to be a guest to share about your coping strategies with crisis and stress, or you are an expert on such matters, please contact Fran Sisco via email at FrancisSisco@aol.com. If you would like to sponsor or advertise on our show, the fees are modest, and the impact quite good, especially after considering the post-show coverage via social media, email blasts, websites, etc.

In addition, older shows can be accessed through a problematic older webpage, at the following link: (Do not use this link as all mp3s will load concurrently, causing delays). 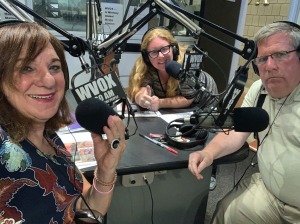 B. A sample of a few radio shows are at the following: 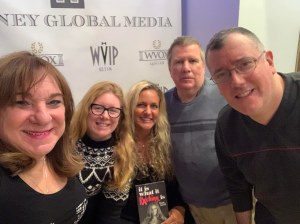 Below is a soundcloud link to the recording on 1/11/22 on WVOX 1460AM. Just click on the link to listen to the 1-hour show, with our wonderful guests-
https://soundcloud.com/…/fran-sisco-crisis-help-radio…
POSTING FROM BEFORE THE SHOW:
To listen in, tune in on your smart phone or computer worldwide to www.wvox.com
To call in with questions or comments, call in 914.636.0110
OVERVIEW –
On Tuesday 1/11/22, from 7pm to 8pm to “Crisis Help Radio Show” will focus on Overcoming the Crisis of Cancer. Co-hosts Fran Sisco, Tom Sullivan (also a cancer survivor), and Kelly Sisco will talk by phone to following individuals, who will share their own experiences and also certain strategies to include (1) being fully expressed with others (2) seeking guidance from family, friends, a higher power, and experts (3) seeing the silver lining and other opportunities and breakthroughs (4) how using the arts could help to develop positivity and connections.
IN STUDIO GUESTS -Studio is at 411 North Ave., New Rochelle, NY 10801
(A) Cindy Sevell – Vibrant author and breast-cancer survivor, Cindy Sevell, will share how she went to battle with cancer and won, and how she published her strategies in her recent book entitled “It is What It F*cking Is.”
CALL-IN GUESTS –
(A) Melanie Cimetta. (mother of three) recently got the news that she is clean from breast cancer. Her story is about persistence and faith.
(

POSSIBLE FROM THE CAR DURING A SUDDEN TRIP TO FLORIDA -Lynn W. and Dave L. – Cancer took the life of Lynn’s husband about two years ago (brain tumor) and Dave’s wife passed in _________ from ___________. Luck and prayers brought the two of them together and they now plan to get married. They each have two stepchildren. Wonderful tale of hope and love. Listen to their story.
(C) Valerie David – A three-time cancer survivor and winner of many awards about her one-person show called “Pink Hulk” has enlightened and empowered hundreds of people around the world who are dealing with cancer, in its many forms. Valerie will share her challenges and how her show has strengthened her resolve and others, and facilitated connections to help and recovery.
(D) Another individual Howard S. will share his 30+ years in recovery from the addiction of alcohol, which requires lots of faith, hopefulness, and sharing with people (e.g. Gamblers Anonymous)
OTHER –
Overall, we will be upbeat and encouraging in our sharing so that listeners could call In on 914.636.0110 and discuss their own challenges as well, as well as the Christmas message of LOVE.
People can listen in worldwide via www.wvox.com. In Westchester and surrounds, the show is heard on 1460AM.
In the famous WVOX studio in New Rochelle, NY, will be Fran, Tom and Kelly and our wonderful engineer Chuck Donegan.
xoxo Fran Sisco, posted 1/10/22
www.TransFranSisco.com
Link to the webpage about the radio show –https://transfransisco.wordpress.com/rb-other-activities/
+++++++++++++++++++++++++++++

1/14/20 – Episode focusing on singers and entertainers Gene DiNapoli (in the studio) and Tom Dudley (by phone). 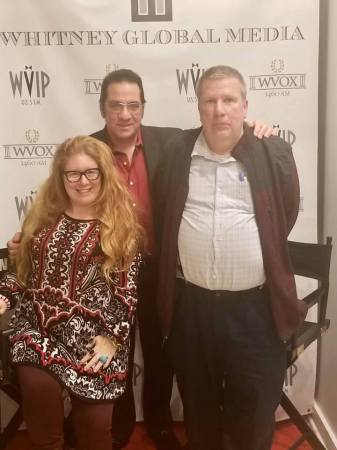 RADIO REPORT – Here is the soundcloud link so you can listen to this edition of the Crisis Help Radio Show that aired on Tuesday from 7 to 8pm on WVOX 1460AM and worldwide on www.wvox.com. The focus was on the benefits of singing to people and the related uplifting, and on singers Gene DiNapoli, in the studio, (including his decades of singing Elvis as well as other stars) and Tom Dudley (by phone). Co-hosts for the show were Tom Sullivan and Kelly Sisco (Fran Sisco was in NYC at a play).
(More info on www.CrisisHelpRadioShow.com). Thanks also to engineer is Chuck Donegan. The show is on the second Tuesday of every month, from 7pm to 8pm.

If you are interested in being a guest or contacting us or the guests Gene DiNapoli or Tom Dudley, please email me at FrancisSisco@aol.com
xoxo Fran Sisco, posted 1/17/20

On 12/10/19 our “Crisis Help Radio Show” on the award-winning WVOX 1460AM, out of New Rochelle, NY studios focused on MUSIC and its role in reducing crisis and stress in our lives – performing it, writing it, playing, listening, everything! People listened in worldwide on www.wvox.com or on your iheartradio app, or by regular 1460 AM radio if you are in southeastern Westchester County, Long Island, parts of CT, the Bronx etc.
Also watch on Facebook Live on Francis Sisco
(I do not own the copyright to any of the songs (including “Into the Mystic” by Van Morrison and include it here on facebook in reference to Pepe Cardona but for no commercial purpose)

The audio of the show is on the below soundcloud link
https://soundcloud.com/…/sisco_crisis-help-radio-show-pepe-…
(Misstatements by Fran Sisco include that Ruth Bader Ginsburg has pancreatic cancer not Parkinsons, DiNapoli’s Stone Mill is at 2 Scarsdale Road, Tuckahoe, not at 2 Tuckahoe Road)

In Studio guests included:
1. Pepe Cardona – sample quicktime file is below. Pepe is famous because of his Alive n’ Kicking band and the hit song “Tighter Tighter” written by Tommy James and the Shondells.
There will also be a discussion of the upcoming fundraiser on Wednesday 12/11/19 at DiNapoli’s Olde Stone Mill, Tuckahoe, NY

Co-hosts are Fran Sisco, Tom Sullivan and Kelly Sisco and we will lead the group during the show in singing “Mistletoe and Holly,” one of the few songs co-written by Frank Sinatra and sung by him.

If you have questions, please call me before 6:30pm tonight, or email me at FrancisSisco@aol.com

More about the show is at
www.CrisisHelpRadioShow.com

1. xmas songs- at Steve Michael’s house of Xmas songs, each connected by a key word that led into the other, and sung as fast as I could. Lol
https://youtu.be/jer4y4ZNkng

2. Tighter through the years – Brooklyn with a good sax

3. Tighter in Tennessee – A few weeks ago before I began my chemo, I flew to Carl Perkins Civic Center In Jackson Tennessee to play an all-star oldies concert. The backup band was excellent especially one of the backup singers Yvonne Smith, who stepped up to sing with me

4. Tighter – This is a video that I put together of Tighter starting with a rare performance from 1970 and continuing on till the present. Much fun. At the end that’s my son Tim playing the lead, who is now playing guitar for me.

5. Tighter – 12/3/19 email – Tommy James who wrote and produced Tighter for me, plays his version in his shows. Last year we opened up for him and then he asked me to join him onstage when he performed it. – Ridgefield CT

During the broadcast, you could listen live on www.wvox.com. Call-in number is 914.636.0110.
The show happened with all guests including on traditional radio, on Facebook Live including interviews on Facetime with filmmakers in Austraia and Italy (and with filmmakers in LA and NJ, and their simultaneous viewing of streaming clips on Facebook. Also a camera on a stationary tripod was used to record for post editing. Excellent varied use of technology thanks to everyone’s help. Some tweaking of sound for the next show on 12/10/19.
xoxo Fran Sisco

(C) If you want to ask questions or contribute a related story, please call in at 914.636.0110. Listen in on www.wvox.com (or 1460AM if you are in certain parts of Westchester, CT, Long Island, and Queens) or tune into our Facebook Live broadcast over the name Francis Sisco on Facebook

And a big thanks to our wonderful engineer Chuck Donegan AND Janelle Allbritton on various tech matters.

GUEST #2 – Brendan Young and his 29-minute film “The Widow”
Below are some clips (and the trailer) to be shown on Facebook Live during the radio broadcast and our discussion with Brendan Young.

Also see the comments section below for the quicktime mov file that has been embedded in this posting:

From Brendan re “The Widow”
– Here’s the download link to a bunch of clip extracts from The Widow – they’re mostly around a 1 minute – couldn’t seem to make them work for 45 seconds!!! Anyway, have a look and see what you think… The first clip highlights the drama and the use of language; the 2nd about the brutality and the dark side of the romantic story; the third and fourth clips show Luisa standing up to her abductors and her betraying ex-lover, dishing out payback and defending herself against troglodyte goombahs!!
I’ve also included the film’s trailer which may also be of use to encapsulate the film.
Cheers,
Brendan

If you want to ask questions or contribute a related story, please call in at 914.636.0110. Listen in on www.wvox.com (or 1460AM if you are in certain parts of Westchester, CT, Long Island, and Queens)

And a big thanks to our wonderful engineer Chuck Donegan. 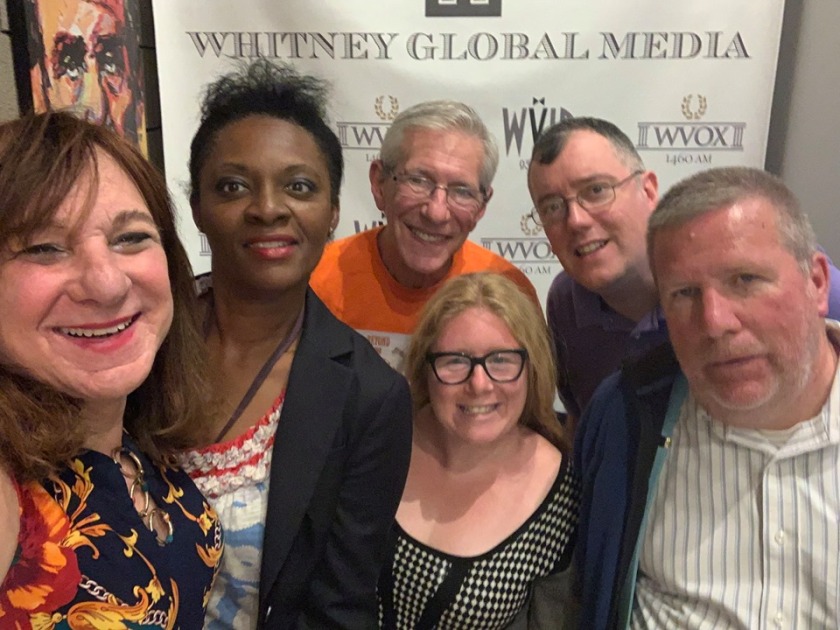 1b Episode on “Feeding the Hungry and Homeless” and discussion with several call-in guests – Recorded 11/14/17.:

1. Episode on “The Power of Collaboration in Dealing With Stress and Crisis” and using as examples the collaboration of musicians, singers, writers, producers etc. to create the songs that are written or co-written by Fran Sisco – Recorded 10/10/17.

5. A small sample of our shows on youtube.com are at the following youtube link:

Videos and mp3s are available of Fran Sisco’s other prior radio shows including “Senior Musings,” “A Question of Money,” “Videos of Cars,” and appearances on others’ shows.

Sample comedy video at The Greenwich Village Comedy Club on 10/13/18:

Sample of Fran’s artwork in video: